With our move to a new league, we've made changes: a new team name, new mascot and new team colors!

And would you like to join our rewards club? Call 1 888 SUM-DEAL for details.

The players, employees, management and owners of the Charleston Sharks wish to express thanks for the 2,216,219 who came to our home games, and to the countless others that followed the team on television and radio.

It's been an exciting year and we look forward to providing you with another one next year!!

Our mascot is without a name, but that will soon be fixed. With our fans help, we will select one. Any fan in attendance during our next homestand can enter a name into a drawing that will determine the mascot's name. Entry forms and collection boxes will be located at the refreshment stands throughout the ballpark. The person submitting the name drawn will also receive a limited edition souvenir tee shirt and refrigerator magnet.

See you at the ballpark!

(employees or relatives of employees of The Charleston Sharks are not eligible to participate.) 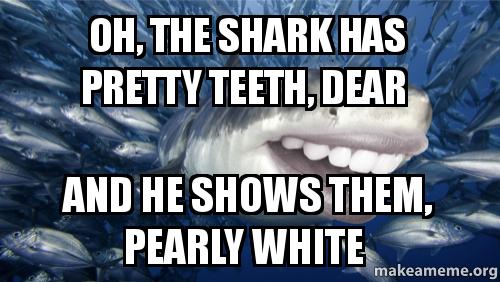 A free travel size dental floss to the first 10,000 entering the ballpark today!

You can pretty teeth and show them pearly white, just like the Shark players.

(Ask you dentist if dental flossing is right for you)

For the rest of the season, when the Sharks score first at a home game, fans at the stadium can buy a beer at 2/3's our regular price!

Why 2/3's? Because baseball history shows when the home team scores first, at a minimum they win about that often.

So share the excitement of an odds on Sharks victory by having a brew with us.

(Limit one per customer, must 21 years of age or older, and offer applies only to domestic non-premium brands)